Some 300 distinguished U.S. and African leaders and top diplomats gathered for The Africa-America Institute’s spectacular annual awards gala and the official launch of the Future Leaders Legacy Fund, a new scholarship fund, on September 29 at 583 Park Avenue in New York City.

Hosted by Zain Asher of CNN International’s ‘Marketplace Africa’, the Future Leaders Legacy Fund Awards Gala was one of the most anticipated and high profile events celebrating African achievement. The gala theme was “Achieving Excellence through Scholarship, Opportunity, and Innovation”.

The Africa-America Institute (AAI) is a U.S.-based international education and policy organization dedicated to strengthening the human capacity of Africans and promoting the continent’s development through higher education and skills training, convening activities, partner engagement, and research. 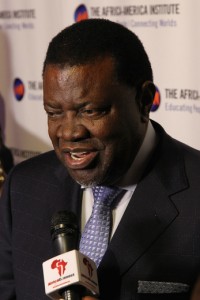 At this year’s Awards Gala, AAI honored H.E. Hage Geingob, President of the Republic of Namibia and AAI alumnus, with the AAI Lifetime Achievement and Distinguished Alumnus Award; Strive Masiyiwa, Zimbabwean technology entrepreneur and philanthropist with the AAI 2015 Business Leader Award; and IBM with the AAI 2015 Corporate Responsibility Award.

The Awards Gala officially launched the Future Leaders Legacy Fund, an exciting new initiative which provides Africa’s brightest, yet under-resourced, students with scholarships to study in high-performing African universities and technical colleges to earn bachelor’s degrees and vocational and technical training certifications.  Proceeds from the gala will support the scholarship fund.

“We must change that…,” Kajunju added, citing a recent report stating that education is a “powerful predictor” of the wealth of African countries for long term development.

Kajunju announced the selection of the inaugural class of Legacy Fund scholars, including a young Ghanaian man who attended a low-ranking junior high, but through perseverance and hard work graduated from one of Ghana’s most prestigious secondary schools, and a young Kenyan woman from an impoverished region of Kenya, who gives back to her community by volunteering as a teacher at a local primary school.

“As you can see, this Fund is transforming these young lives,” said Kajunju.

A leader in Namibia’s liberation movement, President Geingob candidly spoke about building a common humanity through education. The president recounted how his “thirst for education” was the reason why he walked for five days from Namibia to Zambia to travel to the U.S. to study at Fordham University on an AAI-administered scholarship. “Don’t take your education for granted,” said President Geingob.

With more than half of the world’s population under age 30 residing in Africa, Masiyiwa questioned: “What does that mean? That’s some 400 or 500 million people; most of whom should be getting some education and skills training, but they are not getting it.”

“The only answer we can give is to step up on education and skills development,” said Masiyiwa. Watch his acceptance remarks.

Jennifer Crozier, accepted the AAI 2015 Corporate Responsibility Award, on behalf of IBM, in recognition of its commitment to boosting the capacities of Africa’s people and institutions – including skills, technology infrastructure, governance and basic science and research.

“We see the continent not only as a place of potential for its own growth but we see that talent and solutions created in Africa by Africans has the potential to transform beyond the continent,” said Crozier. “We believe that supporting the growth of talent and leadership in Africa is good for our business and it is good for the world,” she added.

IBM set up their first engagement in Africa in 1921, and today has the highest concentration of technical talent on the African continent.

Zoom Wireless Rolling Out Its High-Speed Broadband Services In Kenya