Top Posts
Bitcoin begins climbing into Positive Territory following massive...
How To Protect Yourself Online Against Phishing Using...
Underlying causes of Houston Motorcycle Accidents
6 Proven ways to Grow your Digital Marketing...
Form and Function – A Workspace that Works
Why Implement Cloud Computing In Pharma?
Transitioning to Automated UI Testing: 3 FAQs Answered
Veganomics: Ignore the Vegan Future at Your Own...
Why Work With An IRA Company When Investing...
The Technology Behind the Success of Your Favorite...
You are here Home » Tech » Android Phone Says ‘Insufficient Storage Available’ Error [Fixed]
Tech

Android’s UNIX-based file system has various limitations. Since start, a number of users have reported ‘insufficient storage available’ error while installing or updating the apps on their Android device. This can happen even when you have a very few apps on your phone. A majority of users who get this error quickly go to the settings to find the remaining storage on their phone and get flabbergasted to find out that it is in GBs. Then why the ‘insufficient storage available’ error comes on Android? The answer lies in various reasons, the primary of them is the inability of UNIX-based file system.

Insufficient storage available fix on Android can be achieved via multiple ways and I will talk about them. First let’s mine out the reasons of this common error.

Android’s memory is hashed into different parts invisible to the user. We may see 20GB of free space on our phone but certain areas of the phone eats memory without showing in the notifications area. For example, the Android memory system is hashed into ‘External’, ‘SD’ and ‘Internal Memory’. The Android OS keeps apps, photos, data and other user metrics separate from its internal phone functions. Similarly, in order to beef up the security, Android is separating the apps from all the system files in order to avoid any malware apps. This has caused a lot of confusion. We mainly deal with external memory and don’t know what is going on in the internal Android memory. Also, many discrepancies while displaying the memory can cause the insufficient memory error in Android.

Clearing data and cache is the most useful solution in this case. An Android app divides its working dynamics in three parts. The core app, the app data which is generated by the app and cache or working files of the app, also called temporary files.

Go to Settings, open Apps and you will see the list of working apps. You can reverse the list in order to see which app is taking the most memory of your phone. When you click the app, it will show you the three parts or memory taken over by the working app.

Here, you will see Data and Cache parts. You must not ‘Clear Data’ as it will remove all the app data and move the system to the start. This doesn’t help in solving the insufficient space available error fix in Android. Clearing the Cache works. So just hit the ‘Clear Cache’ button you see below the data part. 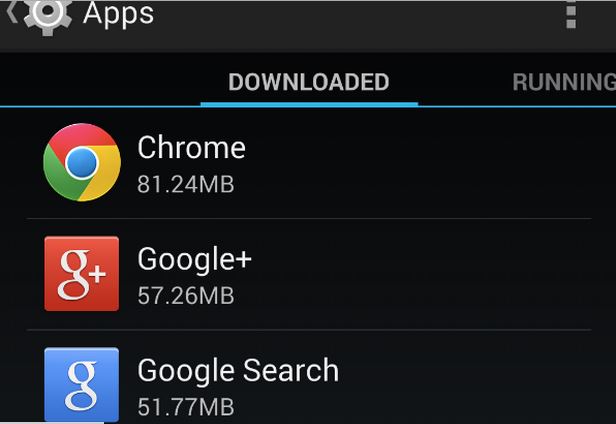 You can also install some third party cache cleaners in order to cut the chase and just clear the cache with one tap from your home screen.

The second trick is to move big memory hog apps to SD Card. If your phone has an SD card, you can move apps to SD cards to save on-phone memory. For this, go to Settings-> Apps and you will see the list of apps. When you click any app, you will see ‘Move to SD Card’ option. In some cases, this option is not active. This means that the maker of the app hasn’t allowed this feature.

You can still move the apps which don’t have the ‘Move to SD Card’ option enabled but the process is long and technical. If interested. Head over to this link and follow the guide. It works perfectly.

Most of the big and memory eating apps like Google Chrome, Google+, Facebook etc, can be moved to SD card easily.

If no option explained above is working, there is a high chance that some folder deep in your phone directory is messing up. To access and delete that folder, you should have a Rooted Android device or terminal SDK access to your phone. Some apps have folder in the root directory and they mess up the space in the device. Mostly, you will find the problematic folder in ‘data/app-data/com’ directory.

Partition SD Card and Install Apps Out of Device

The last option is to partition the SD card and install apps out of the device’s control. This would allow you to bypass insufficient storage available error on Android, but to achieve it, you’ll have to pass through a lengthy and geeky process.