Top Posts
Bitcoin Circuit
Here are Scenarios when VPN can Save you...
5 Effective Cannabis Cultivation Technologies to Try
Top Remote Technologies For Business Security To Streamline...
Understanding Macroeconomics: How Can It Help You Manage...
Remote Working is in Full Swing: Ensure your...
What is Blackjack? Guide for Beginners
4 Effective Strategies to Use Data Warehouses in...
6 Ways to Reduce Back Pain at Work
A Basic Guide on How to Read Trading...
You are here Home » Tech » 14 Best, Funniest and Epic Tweets of All Time…#9 Is Just…. Amazing
Social MediaTwitter

14 Best, Funniest and Epic Tweets of All Time…#9 Is Just…. Amazing

Twitter turned 10 recently. It’s hard to believe. Back in 2006, it all started with a single tweet. People didn’t believe that Twitter would change the way we interact. People often laughed at the logo (that weird bird), follow model, DM, and all the other features of Twitter which are used by more than 600 million users every month.

Perhaps the best way to commemorate the birth of Twitter is to look back and see the best tweets of all time. I will show you the funniest, most exciting and epics tweets ever made on Twitter in these ten long years. Let’s get started.

2. This picture from Ellen is one of the most retweeted tweets on Twitter till date. This picture got more than a million retweets within thirty minutes. Just imagine! 3. Do you know that Hashtag feature was proposed by a Twitter user? Yes! Chris Messina was a power user on Twitter when one fine day he posted an idea that looked super-weird at that time. Have a look. This is the birth of hashtag which is #everywhere today.

4. This is the first tweet from the space. Astronaut TJ Creamer made this tweet real time. A historic moment indeed.

5. This is one of the most dramatic tweets of all time. This guy from Pakistan, Sohaib Athar, was sitting in his home when he heard the helicopters coming and all hell breaking loose. That was the ongoing raid to kill Osama Bin Laden in Abbotabad. He didn’t know at that time that he was tweeting a historic event. 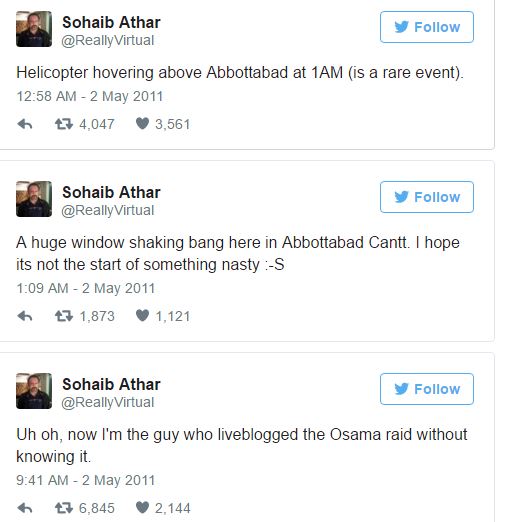 6. Here is a random person who passed hate remarks about Serena Williams getting owned by one and only JK Rowling. Rowling keeps roasting people from time to time on Twitter. 7. Could you help this guy? His family is dying of hunger. But hey, never recommend a decrease in spending on candles. 8. This guy was on a ferry ride when a plane crashed in the Hudson river. 9. And how could we miss this one when CIA joined Twitter in style.

10. Everything happens so much, right? This is one of the funniest tweets of all time.

11. I think this woman pretty much summed up life.

12. Piers Morgan is a famous journalist from Mail Online. This simple tweet got thousands of retweets and likes in a few minutes.

13. This one from Oreo is one of the best tweets of all time. This tweet was made when Super Bowl faced a massive blackout in 2013. 14. And this one from our beloved George RR.Martin takes the lead. He was not happy about not being invited on the marriage by Kardashians.

Tips on Creating and Keeping up a #smallbusiness