Top Posts
Are Gender Biases in GBV Judicial Discourse creating...
Develop a Course Correction for Your Small Business...
Best VPNs for Gaming in 2021
TikTok is now the 2nd Best Platform for...
Taking Advantage of the Business Opportunities presented by...
Marketing Dashboard and its Benefits for your Business
What to Look For in a Quality Essay...
What Are Algorithms & Why Are They Important
The 4 Ways That Time Tracking Employees Saves...
How Modern Technology Is Reshaping the E-Learning Industry
You are here Home » Tech » How To Connect Xbox 360 Controller to PC
Tech

How To Connect Xbox 360 Controller to PC

Read: Control Your Home With iPhone

How to Connect Wireless Xbox 360 Controller to PC

The procedure is not simple and you need to buy the wireless receiver for acting as an interface between PC and game controller.

The wireless gaming receiver of Xbox 360 is available typically for $15.Plug it into the compatible USB port. The receiver will then sync the controller to the PC in very much the same way as the internal receivers of Xbox 360 sync controller to the console. When you have plugged in the device properly, green light will appear on the receiver indicating that it is working properly. 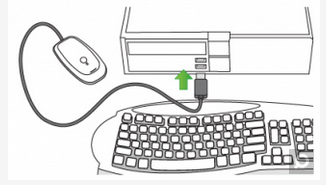 For proper syncing of wireless gaming receiver and Xbox 360 controller, you will have to install the software on PC. Go to the Microsoft hardware website, and then into the Software Downloads section. Click on the Gaming header and then click on the Xbox 360 wireless controller for the Windows link. Choose the version of software compatible with your Windows. Run the installed files when the download is complete. Now, you have to sync your Xbox360 controller with your PC. For this purpose, you need to turn on your gaming controller by holding down the Xbox guide button in the centre of the controller. Wait for the green light to appear. Press the “Connect” button on top of the controller. The pairing process will be completed in a while. After that, you are ready to play games on PC with Xbox 360 controller.

How to Connect Wired Xbox 360 Controller to PC

This process is slightly different from that for the wireless Xbox 360 controller.

When the software is installed successfully, you need to plug your wired device into PC using the USB port.

The final step is to test the controller for its proper working. Go to the Run utility and type “joy.cpl” and hit Enter. Select Xbox 360 controller and click on properties. Now, you must make sure that the controls of the controller are working properly. Pull the triggers and move the joysticks which will ensure that you are able to manipulate the controls.

This article reviewed the easiest approach to connect Xbox 360 controller to PC. This can be accomplished either in wireless or wired mode. Both methods are straightforward and require installation of the software for the controller. You can now do wonders on PC games with Xbox 360 controller.

State Control Over The Internet: Now Comes ‘Wikipedia’ For Russians By Russians

Nokia is back from the “Dead” with a 7.9 Inch iPad-looking tablet running Android Lollipop