Top Posts
What makes a Healthy Environment at the WorkPlace
Headphones For Streaming Movies And Shows – A...
Why is Heart Health Insurance being a Must...
ETH2 Myths – True or False?
How to Outsource Image Moderation
Things You Need to Consider Before Buying a...
Five Things to do During Internship to Stand...
How to Trade Skins in CS:GO?
7 Aspects Of Business Plan You Should Know
Technologies That Make Fast eCommerce Shipping Possible
You are here Home » Tech » Hardware » Ethiopia Prepares To Launch A Satellite Into Space
Hardware

Ethiopia Prepares To Launch A Satellite Into Space

Ethiopia Prepares To Launch A Satellite Into Space

Following the signing of a Memorandum of Understanding (MoU) last Sunday between the Finland-based Space Technology and Science Group (STSG) and Entoto Observatory and Research Center (EORC). Ethiopia has set itself on the path of launching a medium research satellite in five years time. 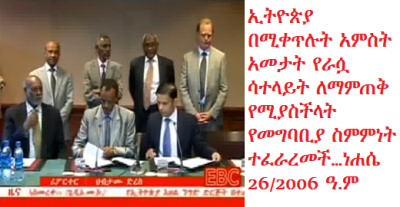 The main goal of the MoU is to develop and deploy medium research satellite weighing between 20 to 25Kgs into space within the next five years. Dr Solomon Belay, the Director of EORC, who signed the agreement, said Ethiopia stand to benefit a lot by having its satellite.

“My institution is prepared to do its level best to build space science in Ethiopia using its matured experience,” said, Ahmed, the CEO at STSG.

According to the signed agreement, once the first project is completed, both institutions will upgrade the terms of the agreement to be more fitting to a large-scale satellite technology development.

“Ethiopia is working hard to pay attention to Space Science. Since EORC was established, it has been working a lot and now Ethiopia is getting know in the world of Space Science,” said, Tefera Walwa, the Board Chair of EORC.

Walwa further explained that American, European and Chinese Researchers have all expressed interest in working together with Ethiopia in this endeavour.

EROC was launched back in 2013, through a collaboration of 32 public universities with the aim of promoting and developing earth observation and Space Science technology in Ethiopia.

You Can Create Quick Notes from Notification Center Using NCMemo

How to Setup An Android App Build Environment with Eclipse, Android SDK, and PhoneGap in Fedora