Top Posts
The Importance of Quality Content and Boosting Your...
Anabolic Steroids
5 Famous Professional Poker Players in the World
Things To Do After Buying a New Car
How Bitcoin Mining Hosting Works in 2022
Five Ways Construction Equipment Tracking Helps Companies
Understanding Facebook Ads Management Services
4 Things to Look Out for When Getting...
6 Benefits of Changing your Car Tyres
Cultivating a Supportive Environment at Your Place of...
You are here Home » Start-ups » Business Plans » Executed properly, Africa stands to be the biggest Free Trade Area in the World
Business Plans

Executed properly, Africa stands to be the biggest Free Trade Area in the World

The Africa Union (AU) has a grand masterplan for the African continent dubbed the Continental Free Trade Area (CTFA), set to be operational by the end of this year. If the CTFA plan takes off, Africa could be the largest Free Trade Area in the world.

The United Nations Economic Commission for Africa (UNECA) says the CTFA could see a 52% ($35 billion) bump in the intra-African trade over the next five years. Stephen Karingi, the head of Regional Integration and Trade Division at UNECA says, “Boosting intra-African trade is the most effective way to speed up Africa’s economic transformation.” While speaking at the recently held Africa Session of the Aid for Trade Global Review 2017, Karingi further elaborated that “trade contributes towards industrialization and structural transformation.”

Some of the commendable Infrastructure laid out across Africa

Ethiopia and Djibouti are connected with, a first-of-its-kind in Africa, a fully electric railroad stretching from Ethiopia’s capital Addis Ababa to Djibouti city; a distance of over 750 kilometers (466 miles). The electric railway has reduced travel time between the two countries by a considerable extent; given the train can run up to speeds of 120 KPH (74.56 MPH). Previously, traveling from Addis Ababa to Djibouti city took about 3-4 days, but now with the new electric train, the travel time has been reduced to just 12 hours. Popularly referred to as the SGR, (Standard Gauge Railway) running from the port city of Mombasa to the capital Nairobi, this railroad is the single largest infrastructure project Kenya has undertaken since independence. Travel time between the two cities has been reduced from 12 hours to just four, and freight trains capacity has been increased to 25 million tons per year. The rail is expected to extend further into Uganda, Rwanda, Ethiopia, and South Sudan. No doubt, this railway will strengthen trade relations between the East African countries.

Back in 1971, the United Nations Economic Commission for Africa (UNECA) proposed the Trans-African Highway connecting all the corners of the continent. From North, South, East, and West Africa all connected by a network of highways tailored to boost internal trade within the continent. Collectively, these networks of roads will stretch some 60,000 km (37,282 miles). 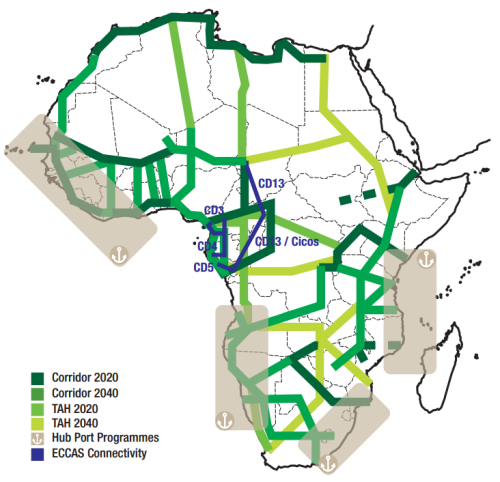 Although the progress on building these networks of roads has been slow, if it reaches completion, it will usher a new level of intra-African trade. So far, only one of the nine planned roads has been completed; the 4,400km (1,732 miles) stretch from Dakar in Senegal to Ndjamena, in Chad. The interesting bit is, over half of the network has already been paved, but their maintenance is a big issue. Coupled with conflicts being experienced in DR Congo, Liberia, Angola, and Sierra Leone, further construction works in some parts is currently impossible.

A number of West African countries and mines are investing in a 3,000 km (1,181 miles) long railway connecting Togo, Nigeria, Ghana, Côte d’Ivoire, Burkina Faso, Benin, and Niger. The railroad will be especially useful to Niger, a landlocked country that relies on its neighbor’s seaports and roads for virtually all its imports.

The port city of Dar es Salaam in Tanzania is one of the major trading hubs in the continent. Tanzania wants to make the port even more efficient with the planned investment of $11 billion to develop its infrastructure further. When completed, the Bagamoyo Port will be the biggest port in East Africa capable of handling 20 million containers per year; double its current capacity. Just recently, Djibouti opened a 690-hectare multi purpose port following a two years construction works. The Doraleh Multipurpose Port is said to have been built at a cost of $590 million, and it is by international standards, one of the most advanced ports in Africa.