Top Posts
Whirl Pooling BTC on Mobile: Some Practical ways...
Bitcoin is a Double Edge Sword for Bitcoin
How the Right Technology and Software can help...
How to Use Machine Learning for your Next...
Alternative Investments Perfects for Beginners
All The Greatest Online Casino Games at Ruby...
Should You Use a Twitch Viewer Bot?
The Most Expensive NFT Deals
The Complete Guide on Selling your Used Servers
10 Tips to Finding a Passion-Filled Career
You are here Home » Social Media » Facebook » Facebook Messenger to stop being Racist and Sexist with New Native Emojis
Facebook

When you think of it, Facebook Messenger is one of the most popular messaging apps. It is also one messaging app with probably the least amount of native emojis. The emojis you send over Messenger, most come from your keyboard or a third party app you installed; (sort of like a plug-in to the Messenger). Well, things are going to get a lot more diverse on Facebook Messenger; there will be a fair representation of the female gender and people of all colors. You, the app is used by people from all over the world.

That must as well be reflected in the options of emojis available on the app. Since it has become virtually impossible for us to go a full length of a conversation without expressing ourselves using an emoji, Facebook is giving us its own set of emojis.

Since these emojis are not native to the Messenger, users on Android cannot see certain emoji send to them by their friends on the iOS platform. As it is currently, users get basic options for emojis like the Like button, which makes a sound – that I still find funny – of an inflating balloon as the thumbs-up grow bigger and bigger the longer you press and hold the button. (Hold it for too long and it will burst). Messenger also has few sticker options that are native to the app.

Messenger is about to give users more options as far as native emojis go, and it will make the emojis as diverse as possible. There will be a fair representation of women, and not just the stereotypical types (though those too will be there, like painting nails, getting hair done, and sitting behind a desk).

There will be over 1,500 new emojis that includes gender-agnostic options and female characters doing various roles. Facebook says, “We’re diversifying the genders to create a more balanced mix that’s more representative of our world.” 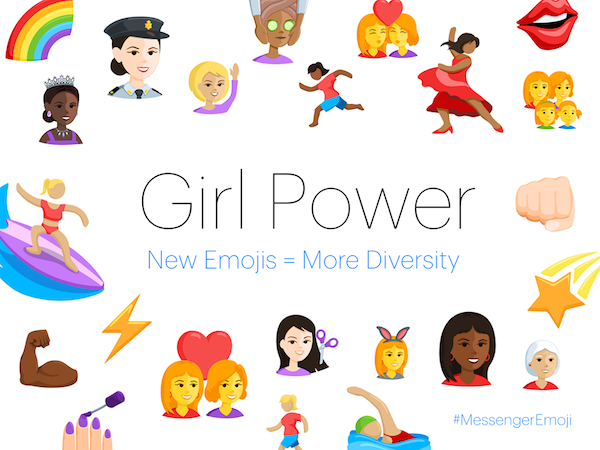 The women emojis will include women as cops, runners, swimmers, and surfers among others. There will be continuous rolling out of female emojis as time goes by.

There will also be a multi-color emojis to suit users from different races and ethnic backgrounds. Users can now select the skin color of the emojis they will be using. They will also be able to pick a hair color. The emojis will roll out to all users regardless of whether they are on the Android or iOS platform. In a blog post, Facebook said, “Messenger is addressing emoji woes by rolling out a new set of standardized emojis so you can be sure you’re sending the right message. No matter what emoji you pick, it will now look the same for all Messenger users, regardless if the recipient is on Android, iOS, or another platform. In other words, no more broken-looking black boxes or emojis that just don’t make sense. Our characters are consistent every time you use them, no matter what platform the recipient is on.”