Top Posts
8 Ways to Transform Your Wellness Routine
Now that Sports Betting is Legal in the...
Finding the Right Company for Your Business GRC...
Why is PPC Important for Digital Marketing Strategies?
Planning a Business Trip
How To Promote Your Online Start-Up
The Skills you Really Need to be an...
5 Payday Loan Alternatives You Might Want to...
Top Tips for Streamlining your Startup
How AI-Powered Dispatching Software Can Streamline Your Service...
You are here Home » Events » Event Articles » FCC filings docs reveal Samsung Galaxy S10 series will have Wi-Fi 6 and Reverse Wireless Charging support
Event Articles

Come February 20, 2019, Samsung Galaxy S10e, Galaxy S10, and Galaxy S10+ will be unveiled to the world at the Samsung Unpacked event. We all know the United States market packs a big purchasing power, and naturally, the South Korean OEM would like to avail its 2019 flagship devices as soon as possible. The U.S. market is in fact among the top of the list of markets where Samsung will avail these flagship devices asap.

However, to launch an electronic device into this market, first, you have to get passed tight scrutiny that is the Federal Communications Commission (FCC) and get their green light. That is exactly what Samsung did; it filed docs, and I presume samples of the device to the FCC for their scrutiny for public safety compliance.

It would appear by filing the needed docs with the FCC, Samsung might have unintentionally revealed some critical details about its upcoming flagship devices. Details the South Korean tech giant would have liked to keep the lid on until the unveiling of the device.

The FCC does make part of such filings public but tries to keep the very critical details under wraps. However, the information the FCC has so far shared about the Galaxy S10e, Galaxy S10, and Galaxy S10+ has revealed key details that picked the attention of many gizmos enthusiasts like innov8tiv. 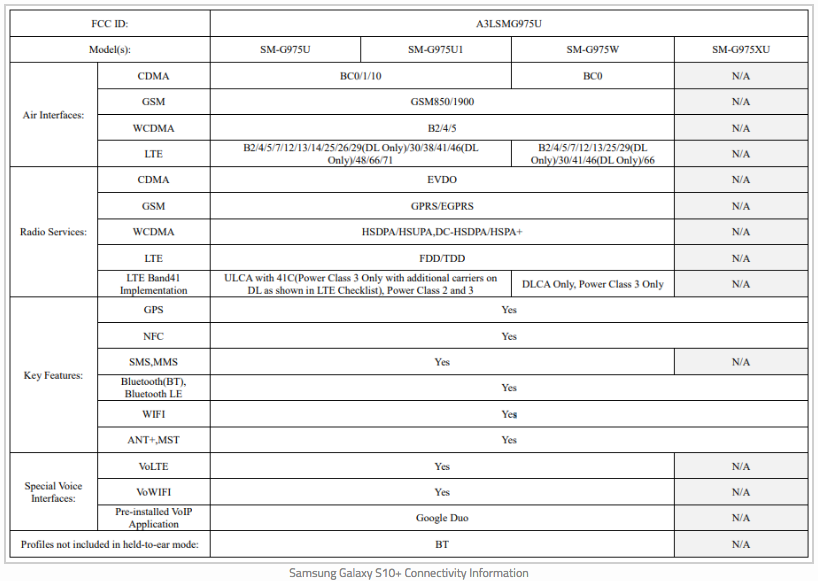 Based on Samsung’s filing to the FCC, we do know key information about the devices’ connectivity specs. Below is a chart showing the connectivity differences between the three variants of the Samsung Galaxy S10 that will be selling in the U.S. markets. The fourth column shows a demo model, and that is why so radio and air interfaces parameters have been entered as N/A.

Based on the charts above, we can establish that the three Galaxy S10 variants come with the same NFC, Bluetooth, MST (for Samsung Pay), VoLTE, VoWiFi, LTE bands, and GPS as its predecessors.

However, the FCC filing reveals a new WiFi 6, 802.11ax. The latest WiFi protocol that supports much faster speed and widest network range. The only disadvantage with this cutting-edge WiFi standard is that it currently has a limited number of supported routers in circulation.

The smartphones will also include the Qualcomm’s next-gen WiFi chips, which are already found in the Snapdragon 855 mobile platform.

There is another document referred to as ‘Wireless Power Transfer’ that reveals the Galaxy S10 will have support for ‘receiv[ing] or transmit[ting] an AC power signal through magnetic induction (MI) or magnetic resonance (MR).” That statement collaborates the rumors that the Galaxy S10 series will support reverse wireless charging.

That said, here’a reminder. Take out your calendar app and mark February 20, 2019, as the Samsung Unpacked day. Be assured innov8tiv will bring you the unveiling as it happens.

How do I change Screenshot Save Location on a Mac?