When Google issued out the Android Nougat update, many users started complaining of Wi-Fi connection problems. It was too apparent that the update caused the problem. In this fix, we are considering the Google Nexus 6P and Nexus 5X.

Although Google has not released an official update to fix the Wi-Fi connection problems for Nexus 5, you can fix the problem by undertaking a custom ROM upgrade. Some of the problems users are complaining about Android Nougat include faster battery drain, Bluetooth connectivity problems, some apps not functioning well, but the most complaints coming in are with Wi-Fi connectivity.

To fix the Wi-Fi connection problem on Google Nexus 6P and Nexus 5X. The first trick would be to reset the network; it often works. Go to the ‘Settings’ panel and do a ‘Backup & Reset’. It will wipe out all the network setting, and you will have to input the network details afresh. It should be able to connect.

Doing a reset will not only wipe out the network settings, but also your installed apps and their data. You will have to do a fresh installation of the apps. That is why the second trick appeals better to most people. The second trick entails setting the Wi-Fi to stay on during sleep mode. It is a simple ‘Settings tinkering’ where you select ‘Keep Wi-Fi During Sleep’ under the Wi-Fi options in the ‘Settings’ menu. You will need to reboot your device to check if it will automatically establish a Wi-Fi connection. 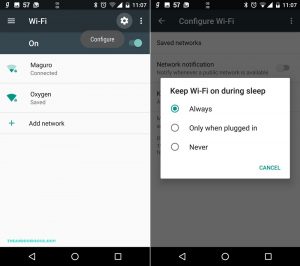 Android Nougat comes with some major flaws, but Google seems to be issuing out updates to improve users experience and iron out some of these problems. Perhaps by the time you are reading this, the problem on your Nexus 6P or Nexus 5X has already been fixed by a Nougat update. If not, then try the trick above, and let us know in the comment section how it went.

Dynamic Lock: Windows 10 Will Automatically Lock When You Move Away from PC, Laptop

Check out Opera’s new concept of a Futuristic Browser, The Neon Browser