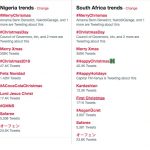 Has the entire world gone crazy? Who should we blame for this, everywhere around the world people are sending festive tweets under the hashtag MerryChrismas. By the way, in case you haven’t seen the error. It is supposed to be spelled MerryChristmas; with the ‘t’.

If you pull up the top trending hashtags in countries such as Kenya, South Africa, Nigeria, USA, and UK among others. At the very top of the trending tweets is the misspelling #MerryChrismas.

Oh wait, we are an autocomplete and autocorrect generation. Things like learning how to spell right is something we never really bother about anymore. But even so, a computer would not do the misspelling on such a wide-scale level. That now brings us to the conspiracy theory of the anti-Christ; an evil force hellbent in making the world forget about Jesus and him being the main reason behind Christmas.

You would notice kids wishes and prayers around the Christmas time is towards a fictional (read non-existent) figure named Santa Claus. How did the fat man in a red suit come into the picture as the poster for a religious Christian event? I don’t see something remotely close to that happening to other religion in the world. Like a Muslim festival where a non-religious figure features most than the man religious figure. Do you see that happening?

Things get worse in the Western World, where kids would write letters to Santa asking him to bring their family gifts, heal their sick, bring a busy family member who is always away on work back home. It is like these kids believe Santa can see what is in their hearts, an omi-present figure who sees all, knows all.

Christmas Day was originally a religious holiday for the Christians, and though there is no complaint that the whole world seems to be celebrating it, the fact that Christ seems to be pushed further out of the picture each year seems to be disturbing. A typical Christmas card of today features more of flying reindeers, dwarf elves, and a fat man in a red suit than it does the Jesus Christ himself, the Christian religion, or the Cross. Now, the entire world has collectively agreed to misspell the word MerryChristmas to MerryChrismas.

Setting the record straight on X-Mas

There is another anti-Christ compiracy theory that says the term X-Mas was created by either Satan himself or his followers to make the world avoid using the name, Christ. So they introduced the X to Xmas so that people cannot have one entire day across the world when the term Christ dominates mouths.

Well, if you were to write ‘Christ’ and ‘mass’ in Greek you will write it as ‘X’ and ‘mas’

In the Greek alphabet, the symbol ‘X’ symbolizes ‘chi’, and in the early days, it was used by Christians to secretly indicate their membership to the church to fellow Christians. So this anti-Christ theory doesn’t hold any water. Xmas and Christmas is just the same thing but in two different languages.