Top Posts
Preparing for 2022 as a Business: Four Things...
The Evolution of Translation Alongside The Digital Industry’s...
Best Casino Games For Beginners
The Psychology of Casino Games and How They...
T20 Cricket World Cup 2021 Preview: All the...
What’s Driving Cryptocurrency Prices?
Is MVC2 Finally Getting a Re-Release?
How Much Does It Actually Cost To Own...
Auto Locksmith – Bar’s Locksmith Affordable Crew
Things to Consider Before Buying RAM
You are here Home » Tech » How to Set any Apple Music Song as Alarm Tone in your iPhone
Tech

Apple recently announced its music streaming service called “Apple Music” and it’s going hit and welcomed across the board. Apple Music has thousands of thousands of songs in the repo, you can stream them anywhere you are on your Apple device. Whenever we hear a great song or music, we immediately wish to have it as an alarm tone on our device. In this article, I will tell you how to set any Apple Music song as alarm tone in your iPhone. Just follow the easy steps given below and make any Apple Music song as alarm alert tone in your device. Let’s start.

Launch the Music app in your iPhone and tap on the ‘Radio’ button.

On the top right of the screen, you will see a search button. Tap it and type the name of the song you want to set as a ringtone in your iPhone in the search bar. When the song starts playing, tap on the now playing screen and find and tap the ‘…’ button. From the menu that will appear after tapping the … button, tap on the ‘Add to My Music’ button. This would save the song in the library and you could also listen to the song offline without the internet. 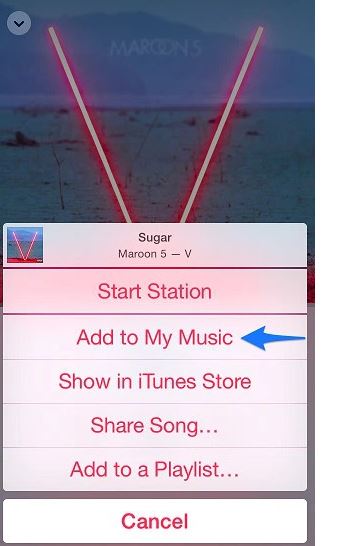 Launch the stock Clock app and hit the ‘Edit’ button. When the edit mode is opened, tap on the alarm for which you want to change the alarm tone in iPhone. From the sound option page, tap ‘Pick a song’ option. Now tap on “songs” from the ‘Select Music’ page. Now search for the song you want to make the alarm ring tone.