Copyright 2022 - All Right Reserved
You are here Home » Tech » How to Unfriend or Block Someone on Facebook for Android, iPhone or iPad (Guide)
Tech Block Someone on Facebook or Unfriend in iPhone, iPad

Launch Facebook app in your device. Tap the ‘More’ option (The one with listed lines) 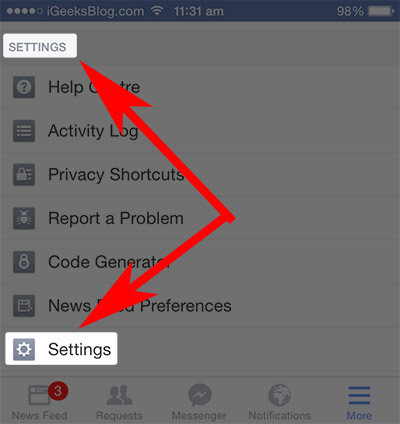 Tap on the option named ‘Blocking’ with the red mark. Now type the name or email address of the person you want to block on Facebook and tap ‘Block’. That contact will be immediately blocked.

Tap ‘More’ icon in the right corner of the interface.

Now, you will see a list of friends with ‘Friends’ option in front of them. Tap this ‘Friends’ box for the friend you want to unfriend on Facebook. You will now see a list of options from where you can select ‘ Unfriend’. You can also unfollow the friend, which will mute him and you will no longer see his status updates or anything in your news feeds.

That’s it. This is how you can block someone on Facebook or unfriend your friend in Facebook for iPhone or iPad.

If you want to unfriend or block anyone on Android, follow the process given below.

Search the contact you want to block or unfriend.

When the profile gets opened, you will see ‘Friend’ sign (with a tick mark if he is your friend on Facebook). Tap ‘Friends’ (just under the profile pic) and you will see an option to unfollow or unfriend. If you want to block a contact, tap the ‘More’ option ( the one with three vertical dots) and you will see a ‘Block’ option. Use it to block the contact on Facebook for Android

This is how you can unfriend a friend or block someone on Android app.