Copyright 2022 - All Right Reserved
You are here Home » Tech » Apps and Software » If You Use Ad Blockers, Yahoo Could Lock You Out Of Your Email Account
Apps and SoftwareTech

If You Use Ad Blockers, Yahoo Could Lock You Out Of Your Email Account

Just stating the obvious, Yahoo has a dwindling number of people still using its emails services. You would think the last thing the company wants to do, is to anger the small number of users it has. Well, the opposite is true, if the report by Digiday is anything to go by.

Yahoo is currently doing some test run on a select few number of users in the U.S.A whereby if the given users have installed ad blocker software. They are not allowed access to their email account.

Mashable reached out to Yahoo, and the company spokesperson said the following in a press statement issued on Friday, November 20th:

“At Yahoo, we are continually developing and testing new product experiences. This is a test we’re running for a small number of Yahoo Mail users in the U.S.”

As expected, Yahoo Mail users were not even the least bit impressed by the move neither were they going to take the message lying down. So a couple took to social media and aired their dissatisfaction by Yahoo Mail services; all the while threatening to abandon their Yahoo email accounts forever. 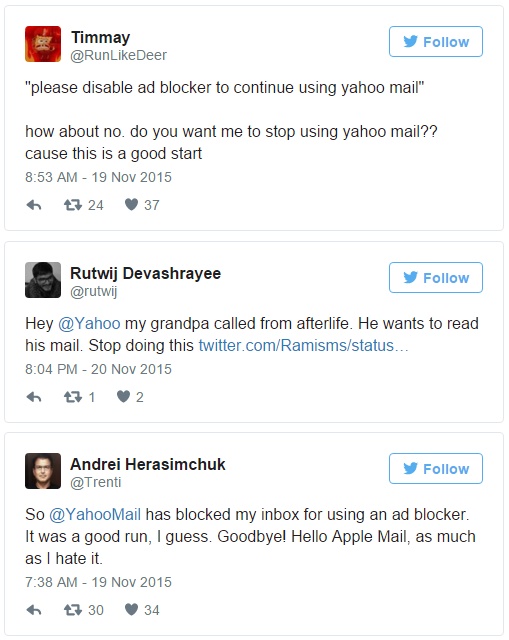 Yahoo is not the first company to take such a drastic move to counter the growing usage of ad blockers. Several well-established media sites have experimented with the idea of ad blocker users altogether given the technology to do so is catching on.

Take, for instance, the Washington Post, which in September used a technology that redirected users with the ad blockers to a subscription page view. The City AM based in London also tried the same thing a few weeks ago.

In all fairness, the Internet and by extension all the online content you find online for free, are made possible by ads. As a user, if you want to block these ads, then it would be virtually impossible for the online content producers to stay in business.

In Yahoo’s case, the company’s move to clamp down on ad blockers may be justified. If one argues that Yahoo’s last month’s financial reports revealed quite a disappointing third quarter earnings. The same can be said for its other financial reports going back to last summer. Yahoo could very well be said to be struggling to keep its head above the water, and people using ad blockers to use its free email services could very well be sinkers pulling the company deep into financial struggles.

Guinea Turns To Gemalto To Modernize Its National Voter Register