Top Posts
New Year, New You: How to Make Those...
How to Know when it’s Time to Hire...
How to Choose the Right Mobile Phone or...
6 Steps That Will Take You Closer to...
Tips for Managing a Contact Center Efficiently
Top 7 Crypto Robots and Why They’re The...
An Analysis of CCIE-EI LAB Exam Topology
UFOD in Drug Addiction Treatment
7 Tips for Choosing a Small Business Loan...
How to Hire a Dedicated Development Team in...
You are here Home » Social Media » Facebook » Lifestage is new Video-Centric Social app for Teens by Facebook
Facebook

In its early years, Facebook used to be a fun platform for the teens. Then parents started getting on it then brands discovered it to be the next big thing in advertisements. Facebook started feeling a bit too crowded and highly monitored for the teens who just want to post their crazy stuff without having their parents being all up in their business.

Little by little, the teens started looking for alternative avenues to go do their crazy things; away from the hawk eyes of the grownups. They flocked to Snapchat and the likes. Facebook, not known for being one to lose a battle, just mimicked the very features teens found appealing on Snapchat and pasted it to their photo-centric app, Instagram. That came in the form of Instagram Stories and live filters.

As if that is not enough, Facebook has created a unique social app just for the teens; that people older than 22 years will not be able to see. Dubbed Lifestage, this social app revolves around teens sharing videos and pictures, and the best part; adults are not invited to the party. That is the cardinal rule.

You must not be 22 years and above! This is strictly a teens-only party, so stay out if your 22 years plus. For those less than 22 years old, you will be asked to take videos and selfies depicting your likes, dislikes, and facial expressions.

The sign-up process will also ask you for videos of your BFF, perhaps a video of you and BFF busting a move. Take a pic to two of your desserts and the rest of the things teens typically find amusing to do on social media. Then the app will create a video automatically during your sign up. It will be the first post you have once your account is set up. 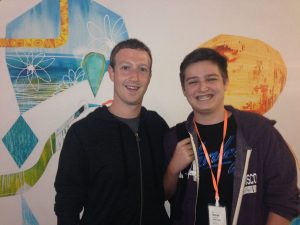 As to whether or not the social network will become the next big thing, remains to be seen. However, one thing is certain. It was created with the 19-year-old users in mind. That is because the brain behind it is a 19-year-old Michael Sayman that created Lifestage.

Sayman was recruited by Facebook soon after he finished high school. He came under Mark Zuckerberg radar because he has been coding apps from the age of 13. Zuckerberg personally reached out to him and made him part of his team.

In a statement, Sayman had this to say about Lifestage. It “looks back at the days of Facebook from 2004 and explores what can be done if we went back and turned the crank all the way forward to 2016 with video-first.”

This new social network perfectly aligns with Zuckerberg’s ambition of having a video-first platform. The app is already available to teens with iOS devices. There is no word yet when it will be available on Android and other platforms. If you are less than 22-years-old and would like to try out Lifestage, click here to download it from iTunes.