The crescent moon next to someone’s name in text can be gray or blue. It is blue when there is a new, unread message. After you have read the message, the moon turns gray which means the text has been read or opened.

Do Not Disturb or Hide Alerts in Messages

iOS lets you mute individual messages thread. The light gray crescent moon appears next to a particular contact because you have enabled Do Not Disturb option for that specific contact. Due to this you don’t receive any notification sounds from those contacts while the screen is locked but you will still receive messages. To disable it in the latest iOS of iPhone, in the thread conversation with that person, tap on the circle ‘i’ on the top right corner of the messages thread. Then, disable the toggle next to ‘Hide Alerts’ to turn off Do Not Disturb. Finally, tap on done on the top right of screen. This will disable Do Not Disturb option for that specific contact. 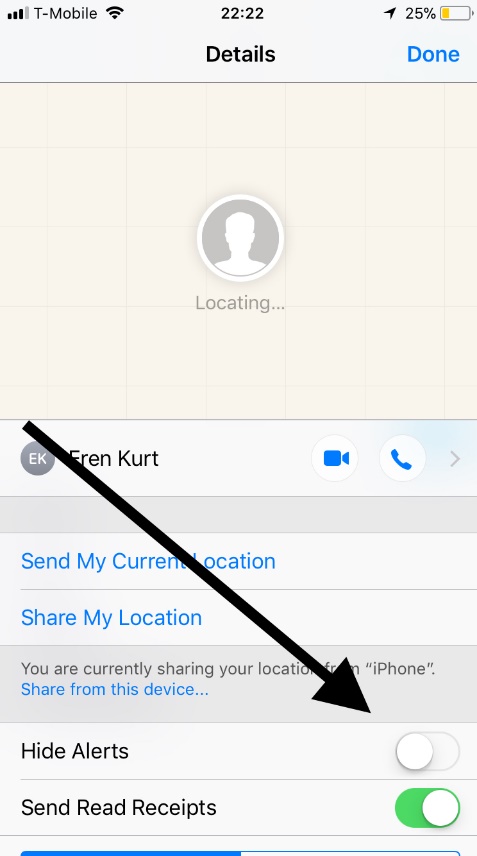 If you have an older version of iOS such as 9.3.3 or below, in the messages thread tap on details on the top right corner instead of the ‘i’. Then, disable the toggle next to ‘Do Not Disturb’ to turn it off.

Overall iPhone’s Do Not Disturb

Also, check the overall Do Not Disturb of your iPhone. Sometimes you accidentally tap on its icon in control centre and it enables Do Not Disturb. If it is enabled, a tiny crescent moon appears on top right of the screen. To disable it, pull up the bottom screen and ensure that Do Not Disturb is disabled over there.