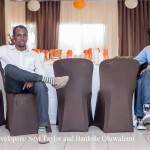 In the wake of West Africa’s most recent and deadly Ebola outbreak, Lagos-based publishing house Big Cabal Media has curated and launched an educational website called Ebola Facts warning of the symptoms of Ebola, explaining what the virus actually is, dispelling myths, as well as the means of the virus’ transmission in a manner that communicate effectively to the local audience. The launch comes as the virus continues to ravage communities in West Africa, and is creeping across international borders at an alarming rate. The site, designed and built in 24 hours, is targeted specifically at the West African market, an increasingly tech-savvy market that is using the internet as its first point of call when searching for information about the deadly disease  and how to protect themselves.  This community often plays the role of influencer and information provider in their local communities.

The developers of the site Seyi Taylor and Bankole Oluwafemi say, “Simply put, we wanted to save lives. By reaching out to people via a medium they were increasingly using in a manner that was simple and easy to grasp, we were able to give them the tools to protect themselves and their familires.”

Since launch, the site has received over 600,000 hits and has been seen on Facebook about 850,000 times.  There have also been requests for it to be printed for wider distribution to communities without the internet.  Content from the site has also been developed into a flyer, newspaper ads and digital billboards.  Work is now ongoing to translate the site to French, Swahili, Yoruba, Igbo, Hausa and Pidgin to cater to a growing regional audience. Dr. Seyi Taylor of Big Cabal Media says, “With the launch of Ebola Facts, we’re tackling an age-old problem of containing a deadly virus with 21st century technology. Millions of Africans are now regular internet consumers and see it as a first point of call for medical information. Ebola Facts was designed to be easily accessible, on all tech platforms – mobile being the no. 1 platform here on the continent – and, importantly, free. We’re hoping that people share this potentially life-saving information as part of the global effort to contain and kill this Ebola outbreak.”

“Technology is a great enabler, for commerce, for social interaction and we hope, with Ebola Facts, for healthcare. We’re been contacted by government officials and medical professionals, who are very excited about the fact that young Africans are finding new and innovative ways of reaching out to as many people as possible to help save lives.”