Review of Apple Watch Series 2 unveiled at the #AppleEvent; Splash and WaterProof Leave to Apple to build up the audience anticipation. As the main attraction for many in attendance at the conference was the next generation of the iPhone. Apple was, however, saving the best for last, and the Apple Watch Series 2 was unveiled though not so many were looking forward to it.

Apple began shipping out smart watch on April 24th, 2015. About 18 months later, Apple Watches are now the number one best selling smart watch in the market and the second best watch brand after Rolex and beating other like the Omega and Fossil brands.

“Apple Watch has really changed what people expect from the watch. But we are just getting started,” said Apple CEO Tim Cook.

It comes running the watchOS 3 that debuted at the last Apple WWDC 2016; the first Apple Watch to run the new operating system. That means it has some new features from the OS such as instant app launching, improved features for messaging, a new dock, and ability to switch between watch faces quickly. Apple also baked a new app Breathe that will tell you when it is time you take a breather and rest; alongside other surprise treats now and then.

Like the first Apple Watch, the Apple Watch Series 2 is also splash-proof and has an additional capability; water resistance up to a depth of 50 meters. That means it is ideal for all you water-related activities like surfing, swimming, and walking in the rain (for whatever reasons you’ll be doing that).

Once you are away from water, Apple says the smartwatch’s speakers have been designed to expel out water. The watch is powered by a new SiP chip with a dual-core processor that according to Apple makes the watch two times faster than the first Apple Watch. It also has a new GPU, and Apple demonstrated its power by doing a demo of the astronomy app Dark Sky that worked at 60fps.

Apple also claims the Apple Watch Series 2 comes with twice the brightness of the previous model with 1,000 nits. As most people were anticipating, the watch came with a built-in GPS. As Apple demoed with the ViewRanger, if you go hiking with the Series 2 on your wrist, you will be alerted when you go on the wrong path.

The first Apple Watch now called Apple Watch Series 1 will also be upgraded and come Sept 9th it will hit the shelves with a new S2 chip at about $269.

Putting the Series 2 and Series 1 Apple Watch side by side, you will notice not much design change was done. The Series 2 still has the same old and familiar square frame that has come to define Apple Watch. The frame encompasses the glass screen. The watch itself is not only splash-proof but also waterproof.

The Series 2 sport version comes in gold, rose gold, space gray, and silver. The watch’s body comes in three types, the aluminum, stainless steel, and white ceramic. Apple says it is four times as hard as stainless steel, but that is yet to be proven from independent sources. It will also come in Hermès bands and colors. 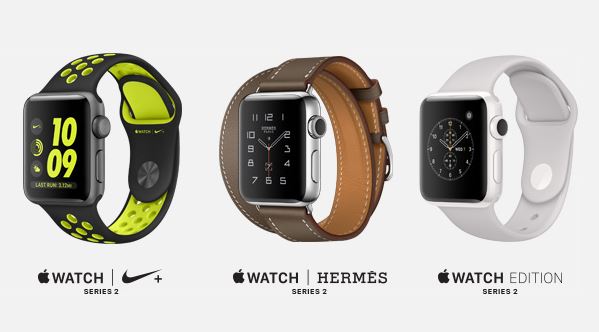 The Apple Watch (aluminum model) will start shipping on September 16th at $369, while the Apple Watch Nike will ship on sometime late October. The price for the stainless steel model is yet to be confirmed.

For more details on specs, pricing, and shipping dates for both Apple Watch Series 1 and 2, check out this page on Apple’s site.