Top Posts
Two Types of Desktop Virtualization
8 Phases of Construction Project Estimating
6 Fresh Ways to Find Your Passion for...
The Tech Era: 5 Reasons to Study Cyber...
SEO for Australian Businesses: How It Benefits Your...
Margin Trading Strategies for Beginners
eSports Gaming
The Importance of Quality Content and Boosting Your...
5 Famous Professional Poker Players in the World
Things To Do After Buying a New Car
You are here Home » Tech » Hardware » Strathmore University Goes Green and Significantly Reduces Its Monthly Power Bill
HardwareTech

Many Kenyans are feeling the pinch of rising cost of living starting with even the very basic commodities like food, housing, power and transportation just to mention a few. It, therefore, goes without saying that the cost of doing business has become high, and for businesses to flourish they have to employ an innovative approach on how they execute their operations. This is exactly what Strathmore University has done. On average, the university’s monthly bill was at Ksh.2.3 million ($26,226). With all other expenses (all of which keep rising in cost), the University had to seek alternative cheap source of energy. Strathmore University has joined the league of cheap alternative energy that comprises of others like the Williamsons Tea Factory that produces its own 1 megawatt (MW) of power and UNEP Headquarters that produces 500 kilowatts.

By the end of last month, Strathmore University had completed installing a 0.6MW solar photovoltaic system that is currently supplying up to 75% of its power demand. This has also drastically reduced the University’s previous power bill that averaged around $26,226 per month. The photovoltaic system has been installed on the rooftops of buildings in its Nairobi Madaraka Campus. 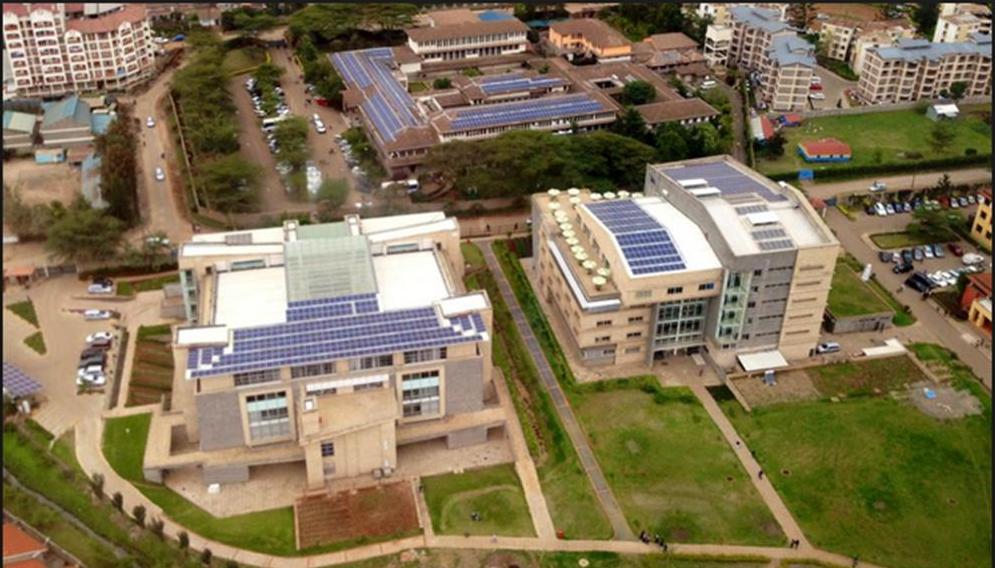 The photovoltaic system, comprise of 2,400 solar panels mounted on six buildings at the campus and have 1,200 optimisers and 30 inverters. The system is said to have a lifespan of more than 20 years. Rather than going for a solar farm, Strathmore University and Williamsons Tea Factory have opted for the roof-top system, which is ideal for organizations operating in areas with space scarcity and vertical development is the only option they have.

“The university’s monthly bill of Sh.2.3 million is now a thing of the past. Installing the system will save the institution a lot of resources in years to come,” said Prof Izael da Silva, a Renewable Energy Specialist and Director of Centre of Excellence in Renewable Energy and Sustainable Development in Strathmore.

The photovoltaic system also employs the use of advanced monitoring software which gives the engineers in charge real-time feedback on individual solar panel performance. For example, through the software the team of engineers manning the project has determined that the system produces between 2.2 – 2.8 megawatts hours per day. The software also goes a long way in enabling the team supervise the entire system at individual panel level and can quickly know when one fails to work, or when it is working abnormally.

“People managing the project are able to login and monitor power produced by each panel on a real-time basis, allowing any potential problems to be spotted and arrested immediately,” said Eng. Raul Figueroa, Executive Director Quests – a real estate project management consulting company operating in Kenya.

The software can also trigger an alarm, showing the engineers which panel(s) is dysfunctional. “We engineers are able to find out about panels that are producing less power from our phones or computers,” added Mr Figueroa.

This project funded by a loan (to the tune of $1.3 million with a payback period of six years) that the University obtained from the French Development, began in October 2013 and Quests, which took the contract and installed the system in three months. The only disadvantage the system has is the lack of power storage capacity that will be used during the night. This is due to the high cost of purchase and maintenance of storage equipment. This means that during night-time the University has to revert to using the expensive power generators or rely on the expensive national electricity distributor Kenya Power. Although during day time, Kenya Power buys energy from the University at 12 cents per kilowatt-hour.

“Kenya Power may offer very low prices for solar energy fed to the grid, but it is inevitable to sell excess solar energy to the national grid especially during the day time… The price can be justified because they incur production, operations and transmission costs,” said Prof Da Silva.

This system is ideal for institutions whose demand for power is very high, such as hospitals and schools. Such institutions stand to benefit from reduced power bills or complete stop of reliance on national distributor and hence channel that money towards other developments.

How to Download and Install Cydia on iPhone 5S – Guide

“Drones Can Create 1M Jobs Across Africa by 2025” Experts Say