Top Posts
Differentiating your Business from Competitors to Boost Sales
How to Help your Business Go Global
Top iOS app Development Companies in 2022
Reserve your Seat at the 9th Edition of...
The Features of Classy Contemporary Offices
What Makes a Law Firm Reliable and Safe...
How to Create the Best Digital Environment as...
Travel through Time with these Ancient Online Slots
4 Tips to Give your Business a Boost...
SA Agritech Disruptor Driving Down Food Costs for...
You are here Home » Events » Event Articles » The Africa-America Institute Recognized US-Africa Private Sector at 2016 Annual Awards Gala
Event Articles Awarded the Regional Integration Award to The People of Rwanda

During the United Nations General Assembly, The Africa-America Institute celebrated and recognized the extraordinary dedication and pioneering achievements of US and African leaders at the AAI 2016 Annual Awards Gala.

The 2016 Honorees were Aliko Dangote, Founder, President and Chief Executive Officer, Dangote Group; Ali Moshiri, President, Chevron Africa and Latin America Exploration and Production Company; Stephen Hayes, CEO of the Corporate Council on Africa; and Sunil Benimadhu, Chief Executive of the Stock Exchange of Mauritius.The Awards Gala also announced the unanimous vote of the AAI Board of Trustees to appoint Kofi Appenteng, Chairman of the Ford Foundation, as the Chief Executive Officer of The Africa-America Institute. View of the atmosphere during the Africa-America Institute’s 2016 Annual Awards Gala at Cipriani 25 Broadway on September 20, 2016 in NYC

This year’s theme is “Education: The Key to Africa’s Economic Growth”.  Nearly 400 U.S., African and global leaders gathered for one of the most high profile events celebrating African achievement in New York City.

“The presence of so many people here demonstrates strong support for the Africa-America Institute,” said Appenteng.

“For 63 years, AAI has continued our great tradition of providing bright, motivated African students with a world-class university education as well as professional development and leadership training in the united states and in Africa, through 23,000 scholarships that have benefitted more than 15,000 Africans.” Aliko Dangote, President and Chief Executive Officer of the Dangote Group, received the AAI 2016 Distinguished African Business Leader Award for his role in championing African entrepreneurship, greater business and investment in Africa through his company’s global brand and his commitment to expanding regional integration on the continent.

Dangote announced that The Dangote Group and AAI will be partnering on workforce development programs for African professionals.

The AAI 2016 Lifetime Achievement Award was presented to Ali Moshiri for his remarkable contributions and impact on the oil and gas industry in Africa, during his decades-long career with Chevron. Moshiri, who is responsible for upstream operations in Africa and Latin America, has dramatically expanded the company’s footprint in Africa under his leadership, increasing investment in the energy sector, and social investment programs across communities. 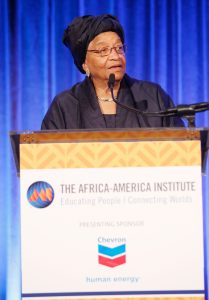 Her Excellency Ellen Johnson Sirleaf, President of the Republic of Liberia, presented the award to Moshiri. President Sirleaf acknowledged Moshiri’s leadership in Chevron’s efforts to eradicate Ebola in West Africa as part of the Ebola Private Sector Mobilization Group. “I can think of no one more deserving of the AAI award, than Ali Moshiri,” said President Sirleaf.

“I am greatly honored that AAI, a remarkable organization, has allowed me to become part of its history. I’m deeply touched and inspired by the recognition by Madam President Ellen Johnson Sirleaf of Chevron’s work in Liberia”, Moshiri said. “I’m proud to accept this award on behalf of Chevron employees. We are all believers in the power of education, partnership, and the value of visionary leadership in Africa.”

“To me, this award acknowledges the work of one of the most diverse staffs in Washington. A leader is only as good as the staff that makes the organization what it is,” said Hayes. “We have been blessed over the years by bright young staff from the USA and Africa.”

“I am humbled and deeply honored by the recognition bestowed on me by the highly respected Africa-America Institute,” said Benimadhu. “I am one of the very lucky 23,000 Africans who have benefitted from an AAI-led educational program. The training I received has played an instrumental role in shaping up my professional career. I congratulate AAI for its active transformational contribution to Africa’s present and future.”

Rwanda was recognized with the AAI 2016 Regional Integration Award for their support of the African Union’s “single African passport”, which will allow for visa-free travel for citizens of African countries to other African states and free trade of goods.

“Our students are contributing to the vibrancy of the region based on their master’s level skills,” said Garrett. “It is my great pleasure to honor the people and government of Rwanda for their vision of a societal and educational transformation, through the strategic use of information and communication technology to produce a knowledge-based economy that will benefit the entire continent.”