Top Posts
7 Helpful Tips for Playing Casino Games With...
How to Deal with Feeling Out of Depth...
Tech Hacks every Office Should Embrace
Is It Better to Play High or Low...
Two Types of Desktop Virtualization
8 Phases of Construction Project Estimating
6 Fresh Ways to Find Your Passion for...
The Tech Era: 5 Reasons to Study Cyber...
SEO for Australian Businesses: How It Benefits Your...
Margin Trading Strategies for Beginners
You are here Home » Featured » The African Tech Hubs pioneering innovation: How digital transformation can drive growth and job creation across emerging economies
Featured

Innovation and entrepreneurship play an ever-increasing role in growing Africa’s emerging technology ecosystem. According to research by the GSMA Ecosystem Accelerator, over the past two years alone. Africa has seen the number of innovation hubs double. Whilst the big 3 cities; Nairobi, Lagos, and Cape Town, have been dominating the sub-Saharan growth narrative, the next wave of incubators are arriving from the new ecosystem cities in North Africa. And the cities driving this growth, Casablanca, Cairo, Sousse, and Algiers are serious about generating sustainable operating models in the fast evolving ICT landscape to overcome core business challenges around viability, future-proofing the business and most importantly, producing continuous success stories.

Funding in North Africa is shifting from relying on public spending

According to the Disrupt Africa Tech Startups Funding Report 2017, funding in African tech startups surged 51% to reach $195 million in 2017, as compared to figures of the same period in 2016. When it comes to funding, the majority of Africa’s tech hubs are grant funded by Governments and foundations, however there has been a growth of social ventures and a trend towards for profit and self-funded endeavours to fast track growth. 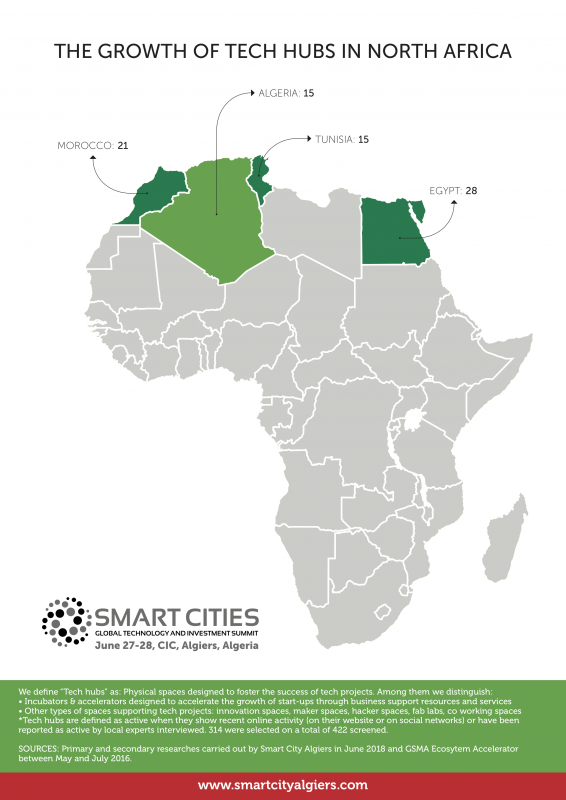 Rabeh Arezki, Chief Economist for Middle East and North Africa Region (MNA) at the World Bank stated: “When it comes to sustainable funding. African tech hubs tend to focus on demand-driven service models that solve problems and support the specific needs of an ecosystem. To succeed, a modern innovation hub needs to pinpoint a niche in growth areas and deliver that proposition. Key areas ripe for development are startups looking at improving internet infrastructure, payment systems, and education. These are the types of businesses we see succeeding.”

Eric Chan, Digital Investment Expert, Xona Partners remarked, “What’s important is that we are seeing the gap in infrastructure that impact technology development, digital entrepreneurship, and innovation closing. What’s powerful is that technology hubs are facilitating the development of that infrastructure. A lot of hubs are driven by forward thinking, young entrepreneurs who are looking to improve their skillset. The hubs are filling those skill gaps which only continue to progress the development of local ecosystem in a positive way.”

Innovation hubs are diversifying their scope

We are also seeing the new innovation hubs adopting hybrid systems to enable sustainability. Many choose a mix of community tech space and ‘paid-for’ co-working space, though corporate partnerships are increasingly becoming more common, especially though mobile operators. Over 14% of active tech hubs in Africa now supported by mobile operators like MNT, due to the opportunity to scale quickly. Examples of this include Orange–Start on in Morocco and Djezzy’s ENP Incubator Algeria. Others create their own private funds by taking equity in early stage start-ups whilst offering business support.

Collaboration is key for growth

What’s significantly changing is that collaboration is pushing the agenda forward. This coming together is fuelled by the increasing awareness that start-ups in Africa will play a key role in the development of the continent’s societies and economies.

Investors, educational institutions, tech giants and mobile operators, have started exploring synergies in helping to shaping the local ecosystems. Open innovation, industrialists, telecommunication companies and financial institutions will soon be able to sponsor the creation of startups that can effectively respond to any technological problem within their organisations in the future. Faten Aissi Zardi, CEO of Meraki Consulting, previously CEO of Sousse, Tunisia’s first start up Incubator, echoes the sentiment. ‘Culture is by far the most critical asset of an ecosystem.’

Africa’s informal economy combined with multiple local stakeholder and restrictive regulations make expansion across more than one region a significant test. In many cases it takes a local ecosystem that can promote growth and social development to expand a business’ impact and by investing in a good ecosystem can be a source of competitive advantage.

Fatiha Slimani from Smart City Algiers believes that their approach is to ‘proactively federate the Algiers based technology ecosystem and speed up the emergence of technology champions. The goal is to have it become a catalyst for strategic initiatives and contribute to develop synergies between all the actors in the value chain.’

Google prepping up to release a Pixelbook running Windows 10